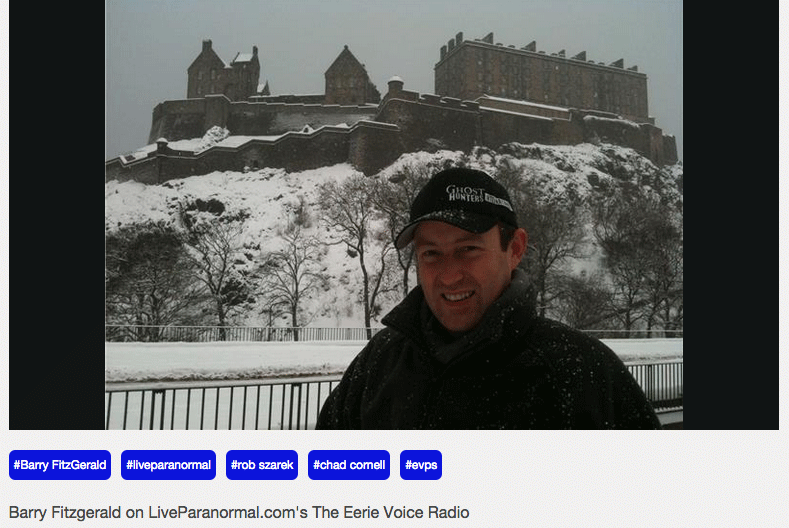 Irish born Barry Fitzgerald has over 20 years experience within the world of the supernatural in which he is known and has taken him to new levels of intrigue and mystery.

Appearing on all 56 episodes of Ghost Hunters International he headed a team on the American NBC owned SyFy network and explored a quandary of paranormal and supernatural phenomenon around the globe.

This progression lead to an authoring of books on subjects within his field of research from ‘The Complete Approach’, ‘The Influence’, ‘My Home Is Haunted Now What?’, ‘In The Mist Of Gods’, ‘Banshee’, ‘Searching The Sídhe‘ and ‘Legend Seekers’. Exciting new works of fiction are being released in 2015 which include the novels ‘The Council Of Three’ & ‘The Clandestine Shadows.’

Being and avid photographer he opened a gallery exhibition displaying some of his collection  in Lviv within the Ukraine in 2011. The collection displayed the beauty at night unseen by the naked eye and highlighted the nature of the supernatural world.

Barry’s new line of research has taken him out of his comfort zone and into areas of Irish myth, legend and folklore with fellow adventurer and co-author Cormac Strain. Legend Seekers is a dramatically different delivery of the old stories inspiring the youth from behind their games consoles and back into the countryside. He is currently working on new filming projects which will be announced later this year.

Back to top
We use cookies to ensure that we give you the best experience on our website.
Ok